The incumbent cellular vendors are getting a jump on the new CRTC Wireless Code which comes into effect in December of this year, 2013, and the two year contract provisions the Code contains.

Even while they fight some of the Code’s clauses in Federal Court, they are introducing 2 year contracts over the next few weeks.

As of this date of writing, there is no indication if Tbaytel will adopt the 2 year model but I would be extremely surprised if they did not.

If anyone is in the market for a new cellular phone, one might want to check out the new rates as well as the terms and conditions.  There are adjustments to the price structure, especially in the amount if the upfront payment required. Not all phones are available with a two year option at this time.

Also, the “tab” concept appears on its way to becoming the preferred method of subsidy payback. As I understand the concept, instead of the customer paying a large onetime fee upfront, the non-subsidized amount is spread out over the length of the contract at a monthly rate. There are numerous variations of the concept and users should take care to ensure they understand the concept for the contract they are signing.
Posted by Hermes at 11:26 No comments:

Bell recently published notifications of public consultations for four cell sites on St. Joseph Island. While the advertisements do not specifically mention Deferral Account sites, other sources indicate that this is the case. The public notification and consultation is required in accordance with the Industry Canada procedures CPC-2-0-03.

There is no indication when the sites will be built or when they will become operational. However, the target date for completion and full operational status of the Deferral Account project is Aug 31, 2014.

The public consultation times and locations are: 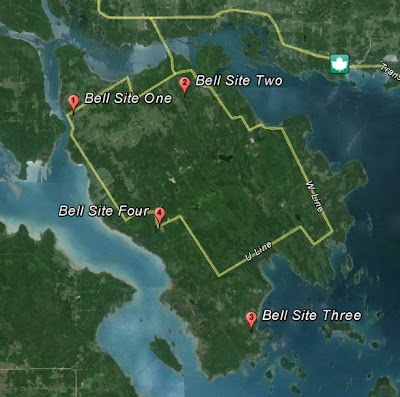 In a related matter, I have heard rumours that Rogers is sniffing around the Island looking for sites. If anyone has heard any details, please let me know.
Posted by Hermes at 19:40 2 comments:

National news media is reporting that the three major incumbent cellular carriers – Bell, Rogers and Telus, often referred to unflatteringly as Robelus - are preparing to launch a legal appeal against certain clauses of the recently announced CRTC Wireless Code. Some updated reports indicate that MTS and SaskTel are joining the process. The motion will be filed at some unspecified future date but possibly as early a 03 Jul 2013 in the Federal Court of Appeal and seeks leave to appeal certain sections of the Code.

In particular it seems they are planning to challenge that the terms of the code that makes the two year stipulation on cellular contract length apply to all cellular contracts after 03 Jun 2015 even though the Code does not come into effect until 02 Dec 2013.

When the CRTC announced the details of the Code on 03 Jun 2013, it indicated the code would not be retroactive or apply to contracts that that existed prior to 02 Dec 2013.  This would seem to mean that in theory any existing 3 year contracts could remain valid until as late as 01 Dec 2016 which is in conflict with the Code date for universal adoption of 03 Jun 2015

The appeal appears to be centred on the question of what happens to existing 3 year contracts that are scheduled to expire in the 18 month period between 03 Jun 2015 and 01 Dec 2016.

There are no reports that the carriers are prepared to challenge any other parts of the Code. Indeed, for the most part they have been in compliance with most parts of the Code for some time, the main exception being the 2 year contract length.

The last time a major legal challenge was launched by the incumbents against a CRTC decision, the whole policy decision concerned came to a grinding halt for almost three years as the appeals worked their way through to the Supreme Court of Canada and the Governor-in-Council.

I see no reason why the CRTC cannot nip this in the bud and change the compulsory adoption date to 01 Dec 2016. Yes, some folks who signed a three year contract after 03 Jun 2013 may feel hard done by but they knew the new terms were coming and could have waited before signing up to a three year deal.

The CRTC needs to decide whether it is in the public interest to fight the carriers or is the public good best served by getting the code operative as soon as practicable.
Posted by Hermes at 15:25 No comments: