The Bell Deferral Account (Deferral Account) project roll out is bearing fruit in the Goulais river area. The aim of the DA project is to provide cellular based broadband (high speed) Internet with the same speed and data caps as Bell’s urban DSL service. The Goulais River Deferral Account area is shown in purple on this map. 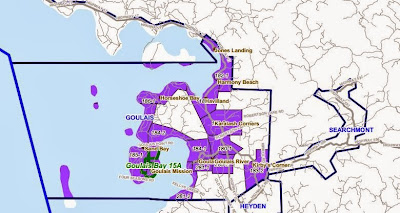 There are currently three Bell cell sites in the North Sault area providing cover along the Hwy 17 corridor including the part running through the DA area.  There is an existing site at the Buttermilk Hill area. To provide the necessary radio signal coverage in the DA and to handle the expected traffic loads without congestion, additional towers/cell sites are required. One of these towers is under construction  on the Pine Shore Road area as shown on this screen shot as a red dot. 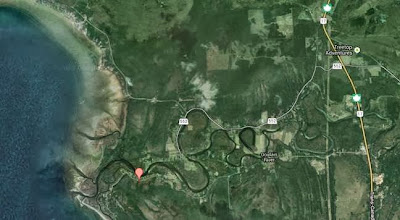 These pictures were taken on 23 Oct 2013 while the tower was still under construction. 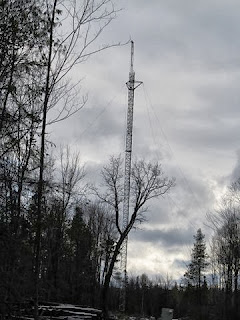 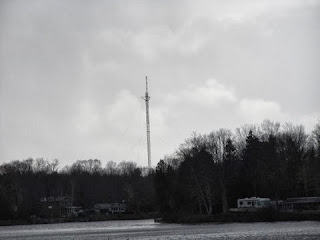 It is known that there are additional sites planned for the Nils Bay and the Marlette Bay areas. There may also be other locations.
Posted by Hermes at 20:00 No comments:

Telus Is Shutting Down Their EV-DO Data Network

As first reported in this blog entry, it is now confirmed Telus is taking the initial steps to decommission its CDMA network.  Effective 31 March 2014, Telus will discontinue EV-DO data service on the CDMA network in all of BC and AB (excluding Edmonton and Calgary.)  There is no news about the rest of Canada.

EV-DO stands for either Enhanced Voice-Data Optimized or Enhanced Voice-Data Only depending on the company using the abbreviation. The standard went through a number of revisions but was eventually overcome by the much faster HSPA and LTE protocols. EV-DO achieved theoretical download speeds starting at 2.4 Mbps, then 3.1 Mbps and finally 14.7 Mbps. A far cry from the 75 to 100 Mbps range claimed for LTE.

Telus is offering affected users in BC and AB outside Edmonton and Calgary an exchange deal to upgrade to HSPA hardware.

Telus is planning to completely shut down the remainder of their CDMA network at some unspecified date in 2015.

There is still no indication of what impact this action by Telus will have on the CDMA networks operated by Bell, Tbaytel or Public.

However, since Bell and Telus share their CDMA networks across the country, so it is hard to see how the decommissioning could not help but affect the Bell network.

There is also the question of whether or not the CRTC or Industry Canada (IC) will take any action in the matter. As noted, the new entrant Public relies on the CDMA networks to offer nationwide service. Without the ability to roam on the Bell and Telus networks, it seems doubtful if Public can survive. Only time will tell.
Posted by Hermes at 10:30 No comments:

The Bell site at the city limits north on Hwy 17 located behind the old Greenbelt bingo hall as reported in this blog entry is finally operational.
Posted by Hermes at 12:00 No comments: