The federal government announced on 15 Oct 2014 that eligible Internet Service Providers (ISP) can now apply to extend or enhance high-speed Internet[1] service to areas in need across the country. As part of the Connecting Canadians initiative, the target of the subsidy program is to connect 280,000 homes to the Internet.[2] See this blog entry  for basic information about the program.

Interested ISPs have until 12 January 2015 to submit their applications. Industry Canada (IC) expects to make the first announcement of successful applicants in the spring of 2015.

ISPs can receive up to 50% of eligible project costs for expenses  in rural areas and up to 75% for expenses in remote (Far North) and Aboriginal communities.

According to the IC release, "Successful ISPs will be expected to provide services at speeds of at least 5 megabits per second (Mbps) to Canadians in rural areas of the country that currently have slower access and 3 to 5 Mbps in the satellite-dependent communities served under the northern component of the program." While likely not the intent of the program, this seems to leave out areas that do not have any access.

Industry Canada also released an application tool kit (ATK). The ATK contains all the necessary background and application information need by the ISPs to prepare their submissions.

If I were preparing a RFP (Request for Proposals) or RFI (Request for Information) for Communications and Technology (ICT) services, I would definitely consider adapting these templates into my document.

A review of the actual application document leads to interesting observations.

The application identifies the following as potential solution types :

The definition of what the applicant proposes to deliver is rather loose in that it does not indicate whether the speeds mentioned are burst speeds, consistent speeds, peak time speeds or any other parameters and metrics that ensure a superior quality of service.  In the Internet Service Offering template, a column heading uses the term "Advertised Speed". I consider this avoidance of a more definitive identification of the speed that an end user may expect a lost opportunity.

This is the quote from the application form.

"A settlement certified by a project technical authority confirming the ability of the technological solution to deliver the minimum download and upload speeds is required to meet this eligibility criterion."

Similarly, the application allows the IPS to establish their own data caps in their proposal. In many  of the sample cases the data caps are far below the average monthly downloads as identified in the in the annual CRTC Telecommunications Monitoring Report referenced in this blog entry.  At a time when the projected increased in data transfer by users is increasing at a two-digit rate, these cap limits are rapidly becoming unrealistic.  A more realistic approach would require applicants to commit to tying their data caps to the annual CRTC statistics.

There is a section in the application which addresses the five-year outlook and scalability that asks the ISPs to describe how the network will handle forecasted network capacity including additional subscribers and usage traffic, enhanced services and the network's ability to adapt to increased speed demands. However, there is no mention of data caps.

Maps are available for download on the Connecting Canadians website that purports to show what areas identified with "households that do not have access to service at 5 Mbps." I have serious reservations as to the accuracy of the information associated with these maps. It is a fact that many of the areas in the Algoma District identified as unserved have access to terrestrial based service in excess of 5 Mbps.

Overall, the application process looks comprehensive from a business perspective. I would like to have seen more stringent technical parameters for the proposed service.


[1] While the CRTC implies a distinction between high-speed and broadband, IC appears to be using the term as all-inclusive for anything that is not dial-up.
[2] This is a bit misleading in that the program will provide the infrastructure necessary to allow access to the Internet. At this time, the cost of actually connecting to the Internet such as set-up charges, routers and modems if required and computers are the responsibility of the individual. In others words, while this program may address some of the physical digital issues, it does not seem to address the economic divide issues.
[3] Back to broadband - not high-speed.
Posted by Hermes at 10:46 No comments:

The Canadian Radio-television and Telecommunications Commission (CRTC) released information on the telecommunications sector from the 2014 Communications Monitoring Report on 25 Sep 2014.
This is an annual report covering multiple aspects of the Canadian  broadcasting and telecommunications sectors. The report is filled with data and statistic that only a nerd could love. Nevertheless it does contain some gems of wisdom which may be of use and interest to readers of this blog.
One striking  statistic is the huge  increase in the average GB downloaded and uploaded per residential Internet subscriber between 2012 and 2013. Only a few years ago the total were in the range of 12.3 GB (2008) and 14.8 GB (2010). These are the latest figures:

(Source: CRTC 2014 Communications Monitoring Report - Table 5.3.0)
One can only expect this trend to continue as the use of video and audio streaming to deliver Internet content continues to expand. Another source of data increase are constant software updates that may require repeated downloading of the same material for each appliance attached through the same modem or hub. For example if you have four computers in a residence, which is not uncommon, the infamous Microsoft Tuesday updates are downloaded four times and each download counts against your data cap.

The report contains figures that some users may find useful.   They show how long it takes in hours for a specific application to use up a monthly data cap.

For example, a wireline connection watching Netflix at a "low"setting can use up a 100GB cap in  263 hours. Increase the Netflix setting to "Super HD" and the 100GB cap is reached in 91 hours. 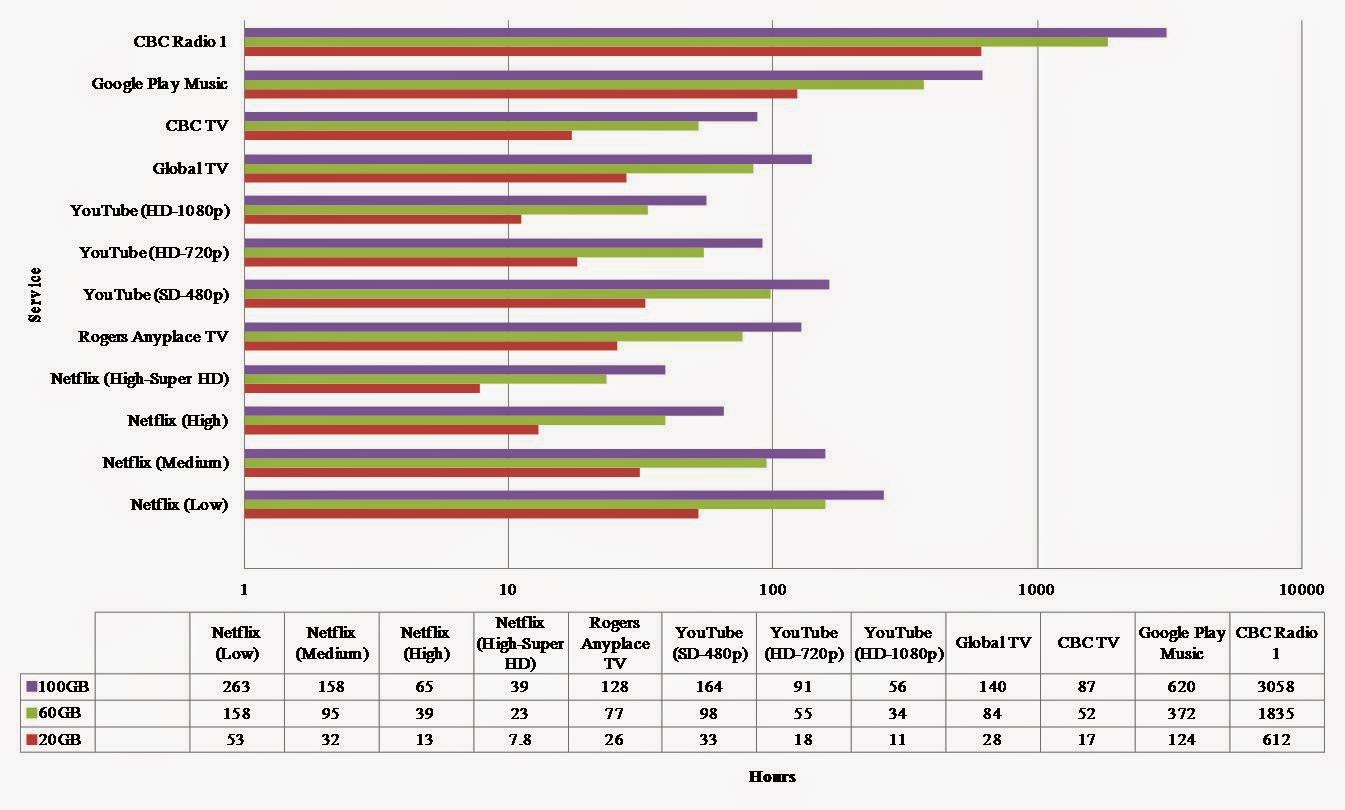