Industry Canada announced the winners of the 700 MHz frequency spectrum auction on February 19, 2014.

The big winner in Northern Ontario appears to be Bell Canada who purchased 4 blocks. The big loser was Tbaytel who was shut out.  Bragg (who operates as Eastlink), Rogers and Telus each got a single block.

Here is the breakdown of the results that affect the Algoma District which is part of the Northern Ontario covered by Auction Area 2-09 is shown on this map: 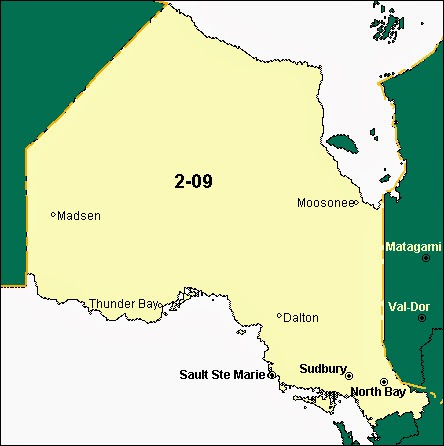 Over the next few days, I will examine the impact the of the auction results and post my impressions  in due course.
Posted by Hermes at 21:04 3 comments:

The inquiry will look at both sides of the satellite provisioning issue;

While the satellite technology exists that can provide a service that compares favourably with terrestrial based systems used in the urban and suburban environment, the amount of bandwidth required it provide reasonable capacity is either not available or prohibitively expensive and in lot of cases a combination of both.

Unfortunately, the inquiry will not address issues relating to satellite services that satellite operators provide directly to end-users, it should cover services provided by the self styled “Canada's leading provider of rural broadband” TSP – Xplornet.

The inquiry is scheduled to be completed by October 2014.

Telecom and the Federal Budget 2014

In the cellular arena, the budget calls for amending the Telecommunications Act by introducing a cap on “wholesale domestic roaming rates to prevent wireless providers from charging other companies more than they charge their own customers for voice, data and text services.” This action is obviously being introduced to help the new entrants –, Mobilicity, Vidéotron and Wind – who rely on the incumbent carriers for network access (roaming) outside their home area.  There should be little direct impact on the average consumer unless they are a new entrant customer and the companies decide to pass the potential savings on to their customers. On the other hand, there is the chance the incumbents could adjust their rates to make-up for any loss income.

The Telecommunications Act will also be amended to give Industry Canada and the CRTC “the power to impose administrative monetary penalties on companies that violate established rules.” Some of the target infractions relate to the Wireless Code, spectrum deployment timelines, service to rural areas and tower sharing.

There are also a number of areas that the government feels need addressing including such as:
There is an additional one that I do not quite understand so I will quote it in full:

“Provide the CRTC with the authority to impose conditions pertaining to social requirements on telecommunications service providers that are not carriers (i.e. “re-sellers” of services) to help ensure that all consumers can benefit, no matter which provider they choose.”

On the broadband (high speed) Internet side of the house, the budget identified the sum of $304 million over five years “to extend and enhance access” broadband access networks. The body of the document also mentions “enhancing and extending access.” This is a subtle change to previous funding programs which could not be used to enhance or improve existing services.

One has to question the targeted speed of 5 Mbps. While this may be considered barely adequate today, I suspect that by the time implementation actually takes place it will be borderline acceptable.

Also, the budget does not address the issue of the fiscal digital divide. The fact remains that many people cannot afford the hardware and recurring charges associated with getting Internet service in their homes.

The telecommunications section ends with a short discussion of the use of spectrum to deliver broadband in rural areas. It reinforces the previously espoused principle of “use it or lose it” where licensees are given a specific time period to implement the service roll-out or lose the license.

It is a fact that while cellular broadband and data is the fastest growing segment of the market and in the rural areas the cheapest for the vendors to install, it is also the most expensive for the end user on a monthly billing basis unless a special tariff is created.

The section ends with this statement: “…an additional 280,000 Canadian households, which represents near universal access. The Government will announce further details about the new program in the coming months.”

One can only hope that they learned from their previous efforts and the new program shows a vast improvement.

Stay tuned for additional news.
Posted by Hermes at 11:57 1 comment: